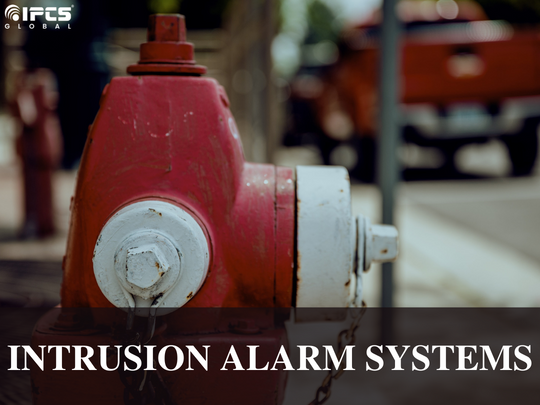 Systems used to monitor and detect any sort of Intrusion or an unauthorised entry in an area.Used for different purposes and in both residential and commercial.The soul purpose of an intrusion alarm system is to protect from vandalism, burglary, property damage and of course the security of the individuals inside the building.When the system is armed and in case the secured system has been breached so motion detection or the sound of breaking glass is heard or any other device is tripped the alarm panel wakes up and produce action such as a siren or strobe, or a silent alarm, which typically includes the notification of the alarm.The system works in tandem with many different devices to secure the area or zone.These devices perform a variety of functions and are designed to work together seamlessly to provide security to a facility.

Following factors to consider while choosing an Intrusion alarm systems;

All sensors are linked to an alarm control panel that acts as the brain for the alarm system.The triggered signal from every sensor is sent to panel.Control panel’s further classified as wired, wireless and hybrid panels.

All devices home run, meaning the wire back to panel.Costly to install.Reliable as compared to wireless or hybrid type panel.

Uses battery powered transmitters which are easier to install.Reduces reliability of systems if batteries are not maintained. One or more wireless repeaters may be required depending on distance to get the signal to the main panel reliably.Can be moved to a new location or site.

Sensors and detectors used whether an unauthorised person has accessed or attempted to access a well protected area. Various types of sensors can be placed around the perimeter of a facility.

Works on piezoelectric effect- effect on transducer(converts one form of energy to another) .piezo (pressure) electric. Piezoelectric crystals convert pressure to electricity.Also the form of a transducer has neutral charge. electric energy generated due to pressure difference.

Based on use of internal reed switch (electromagnetic switch used to control the flow of electricity in a circuit).The magnetic field makes the plates touch each other causing electrica contact.In case of break in contact the panel detects open state as violation and triggers the alarm.

Detects shattering of glass.These sensors are commonly used near glass doors or glass windows.The detection process begins with a microphone that picks up the shattering sound and vibrations coming from the glass.If the vibrations exceed a certain threshold the detector reacts.

Consist of emitter and receiver, the sensor switches as soon as an object interrupts the laser light, red light or infrared light. The invisible beams up to 300m apart indoors and up to 100m apart outdoors. Two types of beam detector End to End and Reflective.

Designed to secure perimeters for security. Tensioned tripwires are usually mounted over fences on walls. Detects intruders who try to damage or cut the fence, climb over or penetrate the wire or barrier to go through it. This system is based on an electro-mechanical sensor integrated with a barbed wire fence that senses movement at each end of tensioned wires. Very low rate of false alarm as it has a high rate of detection. Expensive and complicated to install.

Provides a communication link between the user and the main control panel. Panels are programmed through associated keypads. Panel arming and disarming done through keypads. Two types of keypad, 1.Remote keypad, 2. Onboard Keypad.

To alert emergency services.It sends a wireless signal which dials alarm monitoring staff and alerts them of an emergency condition.

When the Intrusion alarm system is armed and in case the secured system has been breached or bypassed, the motion detection or the sound of breaking of glass is tripped. The panel produces action, sends output to a siren or strobe or a silent alarm, which typically includes the notification of the alarm to users. This all can be learned practically in the BMS and CCTV installation courses in Pune by IPCS Global.